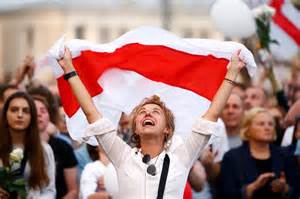 Since 1995 the white-red-white flag is used as a symbol of the opposition to the regime of Alexander Lukashenko, most notably at the protests after the 2006 and 2010 presidential elections and at mass rallies on Freedom Day celebrations as well as Dziady memorial marches. The flag is not officially banned from public usage, but is treated by the authorities as an unregistered symbol which means that demonstration of it by political activists or sports fans can lead to arrests and confiscation of the flags. In early 2010, the political activist Siarhei Kavalenka was arrested for placing the white-red-white flag atop a Christmas tree on the central square of Vitsebsk. The court gave Kavalenka three years of suspended sentence which was followed by a second arrest and Kavalenka's several weeks long hunger strike. The hunger strike was interrupted by force-feeding on 16 January 2012. The flag has been used by opposition supporters during the 2020 Belarusian protests.

The design of the flag used between 19 September 1991 and 5 June 1995 had originally been devised by the Belarusian Democratic Republic (March to December 1918). The original person behind the design of the flag is believed to have been Klaudzi Duzh-Dusheuski before 1917 and this design is known in Belarusian as the byel-chyrvona-byely s'tsyah literally "white-red-white flag"). Red and white have traditionally been used in state heraldry of the Grand Duchy of Lithuania and the Polish–Lithuanian Commonwealth. The colours are also based on those of the Pahonia coat of arms that was a traditional coat of arms of Belarusian lands and had a white horseman on a red background. There are several other theories explaining the flag's origin. One theory speaks of an allusion to the name of the country, White Ruthenia.


In late 1980s the flag was again used as a symbol of national revival and democratic changes in Belarus. By proposal of the Belarusian Popular Front the flag became state symbol of Belarus upon its regaining of independence in 1991.

"White-Red-White Flag: The True Belarusian Symbol or a Sign of the Opposition?

Until Lukashenka came to power the White-Red-White flag served as the official symbol of Belarus. Now the Belarusian diaspora and nearly all opposition parties in Belarus consider it as the only true flag of Belarus. In Belarus it is largely banned by the authorities and Belarusian sport officials put pressure on the organisers of international sport events to eliminate the former state symbols from the stands, to prevent spectators from seeing “opposition" symbols on TV.


Lukashenka vs the Flag

The White-Red-White flag and Pahonia have a long history. When Belarus became a separate state in 1918-1919 these were the official symbols of the Belarusian Peoples Republic until replaced by a Communist government. The Belarusian minority in Poland actively used these symbols during the inter-war period. During World War II they were also used by Belarusian organisations that collaborated with the Nazis who saw it as a chance to revive the Belarusian culture.

In 1991, when the country declared independence the flag and shield again became official symbols of Belarus.

In 1995, to consolidate his power Lukashenka initiated a referendum. One of the objectives of the referendum was to change the state symbols which were associated with the national movement against the USSR at the end of the 1980s. Lukashenka promised to revive the Soviet Union and by changing the national symbols to those associated with Soviet Belarus, he gained a symbolic victory over the Belarusian Popular Front.

Lukashenka's main argument to change the White-Red-White flag and the Pahonia symbol was that during the World War II Belarusian organisations that collaborated with the Nazis had used them. Propaganda movies which followed this initiative compared the Belarusian Popular Front, the main pro-democracy opposition party, to fascists. According to Lukashenka's logic those who use White-Red-White flag are ideological followers of Nazi collaborators. The referendum took place with gross violations of democratic standards and in the atmosphere of massive state propaganda. Nonetheless, the symbols were changed.

The Symbol of Freedom

Today most of the organisations of the Belarusian diaspora and Belarusian opposition refuse to use the official Red-Green flag and represent their country with White-Red-White flag. In late of 1990s and 2000s as Lukashenka's political regime consolidated its power, the White-Red-White flag became more than a banned national symbol but also a sign of struggle against authoritarianism.

The current Red-Green official flag refers to the Soviet past of Belarus and corresponds to official historiography and state ideology praising the Soviet period. While the White-Red-White flag symbolises a brief democratic period of 1990s as well as an anti-Soviet tradition of Belarusian national revival it clearly confronts the official interpretation of the Belarusian history.

Not surprising that Belarusian authorities do not tolerate the former state symbols. It is strictly prohibited to fly the White-Red-White flag at sports events in Belarus and scores of democratic activists have been imprisoned for displaying the flag in public.

An illustration of this is the case of Siarhei Kavalenka. In January 2010, he placed a White-Red-White flag on the top of the Christmas tree in the centre of Vitebsk for which a criminal court sentenced him to a three year suspended sentence. In 2011, police arrested Kavalenka again, this time on the basis of violating the conditions of the suspended sentence, he was sentenced to 25 months in prison.

Belarusian sports officials often try to put pressure on the organisers of international sport events to remove White-Red-White flags from the stands. The recent ban at the Ice Hockey World Championship is not an isolated case.

In 2011, the former Belarusian official flag was banned from FIBA EuroBasket Women's matches in Poland. Security searched for and removed fans with White-Red-White flags from the stands during the match Belarus played against Lithuania.

In October 2010 at the match of UEFA Europa League FC Dynamo Minsk played against Club Brugge K.V. in Belgium several fans supported Belarusian team with White-Red-White flag. An unknown man, introducing himself as a person “in charge of the Belarusian fans”, was trying aggressively to take away the flag from Belarusian supporters.

A similar story took place in Moldova at a match where FC BATE Barysau played against FC Sheriff Tiraspol — fans with White-Red-White flags and Red-Green flags started a fight with each other during the game. This resulted in the arrest of 15 people.

Many sports fans persist in supporting Belarusian athletes in international competitions using the White-Red-White flag, which in most cases the organisers tolerate. This irritates the Belarusian government: to them this symbolises not the country where they come from but the political opposition which they cannot tolerate.

Many Belarusians will continue taking the risk of using what they regard as their true national symbols. They cherish a rare sense of freedom and self-expression unavailable at sports events back home. "